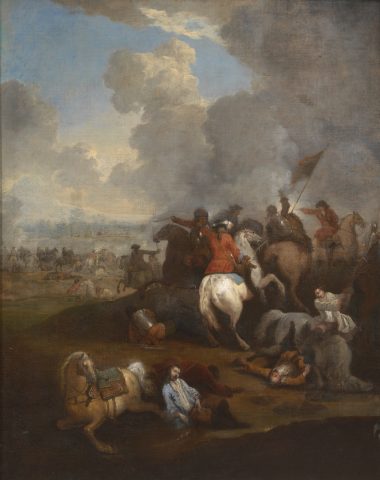 This painting has been retraced to the Eighteenth ‘battle painter’ Casanova by Giancarlo Sestieri, who places it “in a by now mature phase” of the painter. After his first training in Venice, Casanova completed his education in Florence with Simonini around 1750, to then rise to fame in large European capitals as Paris, Dresden and Wien, where the artist died in the early 18th century.

In the foreground our work vaunts a virulent confrontation between cavalrymen, while the rest of the battle is taking place in the background, in a clearing illuminated by the sun. The composition is skilfully orchestrated; the artist has painted an area in half-shade in the foreground, from which the vigorous figure of a rearing white horse mounted by a rider wearing a red blouse stands out. Precisely this figure of the charger in light colour in the foreground has been identified by Sestieri as one of the distinctive traits of Casanova, and we also find it, for instance, in the initialled painting Battle between Christian and Turkish cavalry and in the work Attack on a convoy, in which we also find other consonances as the figure of the galloping horse in the foreground, which appears mirrorwise in our painting, or the similarly ‘overdrawn’ physiognomies of the personalities engaged in the battle.