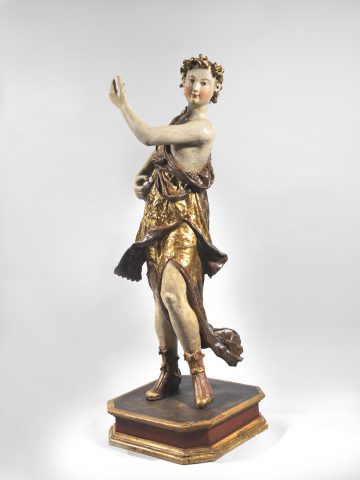 This beautiful sculpture belongs to a renowned group of works located around Umbria, Marche and Tuscany. The sculptures are wooden, often modelled without clothing, with later additions of cloth, papier- mache and metallic foils, to enrich the simulacrum and its realism.

The most important stylistic nucleus of this great family of sculptures, which also includes this marvelous ‘Announcing Angel’, has been labelled with the critical name of Maestro di Magione, stemming from a Saint Rocco preserved in the small castle of Magione in the area of Perugia. This sculptor has been identified as Neri Alberti da Sansepolcro, an important carver from the town of Sansepolcro, who was active for several decades of the sixteenth century and had contacts with Rafaellino del Colle and with Vasari.

The recent discovery of a payment document for the Crucifix of Bettona, typical work of the Maestro di Magione, to another artist, Bernardino di Mariotto, cleared up the matter. The grand sculpture group therefore came out of the workshop of Bernardino, painter and sculptor from Perugia, who was also very active in the Marche region, where he lived for twenty years from 1501 to 1521. With him, his adopted son Marino d’Antonio Samminucci was also documented as a wood sculptor, who worked in Perugia almost to the end of the sixteenth century.

This Angel, which was intended to match with an Announced Virgin, is perfectly insertable among the most mature work by Bernardino, defined by a softened carving and therefore dateable to halfway through the century.