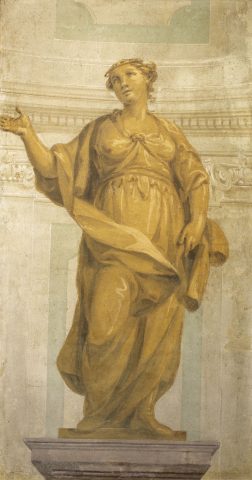 In the scenario of general political and economic decline faced by the states of the Peninsula in the Eighteenth century, the Venetian republic – while playing a paradigmatic role in this progressive fall – gave birth to what may be defined as the last two Italian artists of international prestige, namely Giovan Battista Tiepolo and Antonio Canova. The importance and success of the former, continued by his son Giandomenico, were as may be expected to influence the Venetian artistic production of the second half of the Eighteenth century. Among the painters who worked in the wake of the great master we also find the author of these two large allegorical figures, which Dario Succi has recognized as Costantino Cedini, “a leading figure in the Venetian milieu associated with the transition of Tiepolo’s typically rococo figurative world to a more modern neoclassical approach to art”. Apprenticed in the workshop of Jacopo Guarana, a decorator who was very popular in Venice, Cedini is registered as a member of the local guild of painters from 1768 to 1771.

In his study of the paintings, which feature two graceful girls in the form of statues placed against an architectural background that were probably once part of the decoration of a patrician mansion, Succi stresses in particular the resemblances between these works and a group of four monochromes symbolizing the Seasons of villa Bon in Mira, retraceable to Cedini, “due to the characteristic Tiepolo-inspired style, softened by more slender and gentle lines, and by the modelling without rough areas and the way of arranging the figures within softly swelling draperies”.

As to the dating of the works presented here, the scholar considers them to have been painted in the Eighties, in a period predating the decorations, from 1794, of the aforementioned villa.