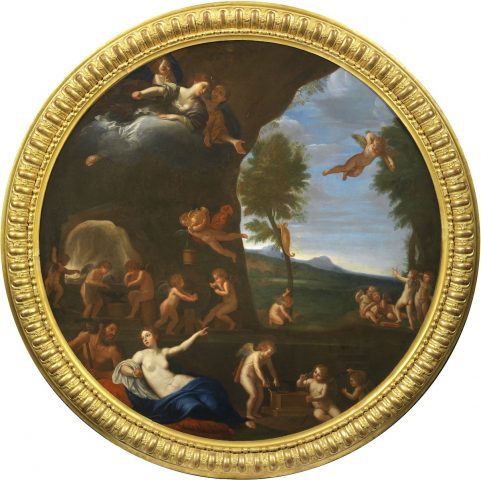 These two rather large ‘tondi’, probably from the workshop of Albani, reproduce two compositions from the work ‘Seasons’ painted by Francesco Albani between 1617 and 1622 for Scipione Borghese’s beautiful villa in Rome.

The Emilian artist was a pupil of Calvaert and then became a member of Carracci’s academy. He followed Carracci to Rome where he remained between 1601 and 1625 with only brief interruptions, thereafter returning definitively to his hometown, Bologna. Albani was one of the most important representatives of Classicism in Emilia, and one of the most sought-after painters of this time along with Domenichino and Guido Reni. The subjects of Albani’s paintings include mythological and religious scene as well as landscapes.

The first of our two ‘tondi’, Venus in Vulcan’s Forge, depicts the goddess of Beauty reclining beside her husband while Diana observes from above surrounded by a myriad of winged cherubs intently preparing their arrows. This painting was inspired, as were the others in the series, by references in Philostratus the Elder of Lemnos’ (I,6) literary work ‘Images’, in which he describes various paintings once in the entrance hall of an ancient villa near Naples. Among these he mentions paintings of amorous scenes set in each of the four seasons. The first ‘tondo’ represents Summer while the second, Diana’s Nymphs disarming the sleeping Cupids, is instead an allegorical image representing the torpor of the senses during Winter.

Our ‘tondi’ are slightly smaller than the canvases in the Borghese Gallery (154 cm diameter) and were among later versions of Albani’s more successful compositions. We know, in fact, that the Borghese family had copies of these works made in the middle of the 17th century when the originals were transferred from the villa to Palazzo Borghese.