The challenge on Mount Carmel 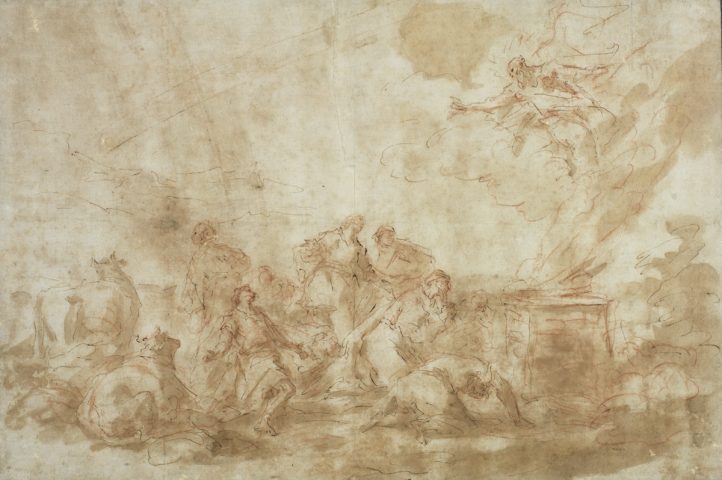 The challenge on Mount Carmel

In his volume on Guardi’s drawings, Antonio Morassi defines the graphic work of the artist, one of the leading representatives of Venetian scenery painting along with Canaletto and Bellotto, as “a rapid extemporaneous sketching, that instantly captures a fleeting situation of gestures and emotions”. The definition is a perfect rendition, in spite of the limits intrinsic to the word as compared to the endless nuances created by an image, of the sublime lightness of the work of this painter and the refined drawing we are presenting. The figures admiring a pyre in flame are an illustration of the Biblical episode (1 Kings 18, 20-40) in which the prophet Elijah, to convince King Achab of the falsity of idolatry, challenged the prophets of the false god Baal on mount Carmel: “I remained alone, prophet of the Lord, and the prophets of Baal four hundred and fifty. Let them therefore give us two bullocks; and let them choose one bullock for themselves, and cut it in pieces, and lay it on wood, and put no fire under it. And call ye on the name of your gods and I will call on the name of the Lord: and the God that answereth by fire, let him be God”. Only Elijah’s pyre was alighted, and the population was thus convinced and lynched the impostor priests. On left side of the drawing, in a touching passage of nature captured with a few expert lines, we see the two bullocks ready for sacrifice.

This composition has been published with the general indication of ‘Sacrifice scene’ by Morassi himself in his imposing monograph (A. Morassi, Guardi, i disegni, Milan, 1975, pages 41-43, 101, cat. 120, fig. 122), who has compared it in stylistic terms to the Presentation at the Temple, an early work by Francesco Guardi now at the Uffizi in Florence. As the expert observes, the two drawings “expertly stained by watercolour and with a carefully balanced composition, are finished and accomplished works in their own right regardless of their possible, and not ascertained, function as preparatory drawings for a painting” (pages 41-43).