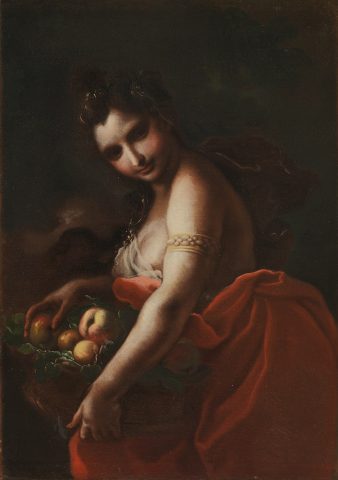 The two exuberant female figures – the one carrying flowers and the other fruits – are very probably images of minor goddesses in the Roman creed. The handsome young woman whose blond hair is ruffled by the wind probably represents Flora, the goddess who embodied bloom and who in Renaissance came to be identified with Spring, while the girl who holds the fruit basket is a personification of Pomona, the ancient patrona pomorum, who along with Bacco was a mythological figure linked to autumn.

The quick and lively brushstrokes these two canvases have been realized by is attributable to the hand of the Milanese painter Carlo Preda, an artist who spent long periods in Genoa, one of the most vivacious and prolific centres of Baroque painting, where artists such as Domenico Piola and Gregorio de Ferrari, authors whom Clerici Bagozzi indicated as influential figures for this artist’s work in Liguria some decades ago (in Note su Carlo Preda, in “Paragone”, 347, pages 58-63, p. 59).

Among the works that are most representative for purposes of com- parison with this pair of paintings we may mention Youth saved from the furnace to be found at the Cloister of St. Anthony in Milan, which belongs to the cycle of the Most Holy Sacrament painted for the cathedral of the city, in which also the Venetian Sebastiano Ricci participated in the same year. In the figure occupying a central position in this eventful canvas we find a quite characteristic development of the drapery folds, which are in particular comparable to those featured by the portrait of Pomona presented here, while the amazed personality to the right has the same sinuous snake-shaped fingers as Flora, example of the “impeccable Neo- Mannerist drawing style inspired by Parmigianino” which has already been observed by Giuseppe Cirillo and Giovanni Godi (Postilla a Carlo Preda, in “Paragone”, 357, pages 94-95).