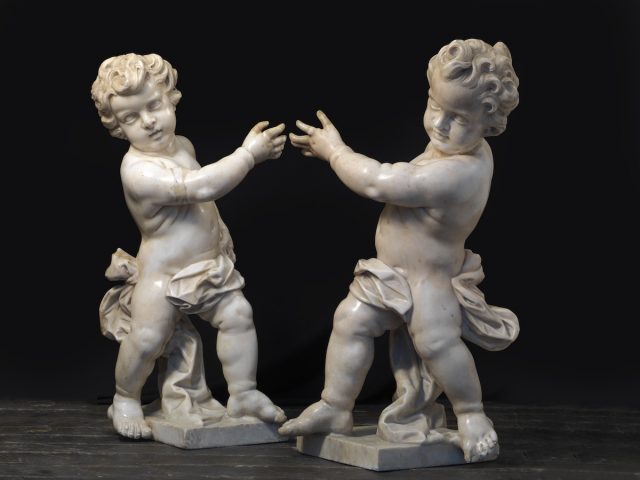 The masterly skill of Bernini, especially in the late works of the Roman artist, is evident in the execution of these cupids that were most probably part of the decoration of some important monument associated with a church. The nonchalance and vitality with which the two sculptures move in space, the fluent and voluminous draperies with faceted and geometrized manners and the able rendition of the soft skin would have been impossible without a knowledge of the work of the great Bernini.

These characteristics therefore make us retrace the author of this work, in terms of style, to the circle of artists who worked in Rome in the late Seventeenth century, as for instance the Mazzuoli family of artists, originally from Siena – a member of the latter, Giuseppe, was one of Gian Lorenzo Bernini’s closest collaborators – or less known artists as the sculptor Lorenzo Ottoni, the probable author of the Funerary monument to Ercole and Luigi Bolognetti in the Roman church of Jesus and Mary, who together with other youths upheld – after the death of the leader of the movement in 1680 – a “partly new style that, without disavowing Bernini’s lesson, interpreted it with greater lightness in an elegant and sometimes witty language” (A. Angelini, Gian Lorenzo Bernini e i Chigi tra Roma e Siena, Cinisello Balsamo, 1998, p. 260).