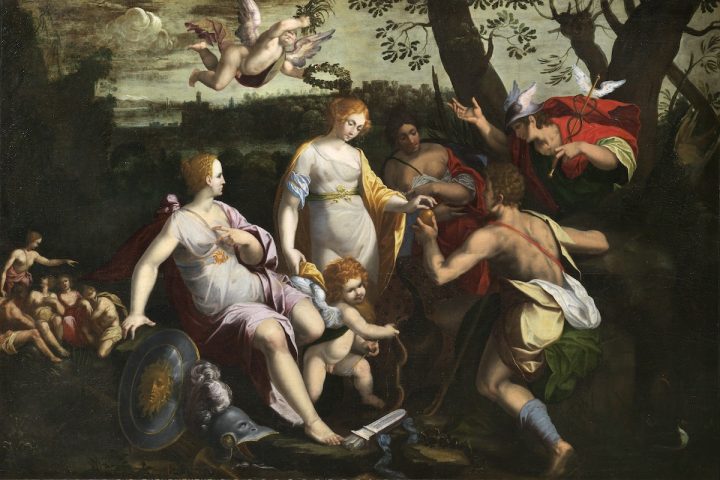 This large work depicts Paris, entrusted with the task of deciding who among the beautiful goddesses of the Olympus is the prettiest, as he makes his fateful choice. It is Hermes who introduces the trio before the willing judge, who has no idea of the disasters that will follow his decision; it is formed of Athena, who appears on the left, next to a shield decorated with the head of the Medusa and the customary helmet, Aphrodite, who receives an apple and a crown of laurels from a chubby amorino, and finally Hera, Zeus’ wife, flanked by the peacock that often accompanies her in images.

The importance of the work is witnessed by the existence of an interesting preparatory drawing with slight modifications and by the coat of arms of the Odescalchi, a famous family originally from Como but since long settled in Rome, which appears on Athena’s belt. The latter detail indicates that the canvas is from Rome, and that it was ordered by the family which was to give birth to Pope Innocence XI (1676-1689).

The author of the study on the painting, Francesca Cappelletti, suggests that the work is attributable to Hans Speckaert, a Flemish artist who, along with hundreds of fellow countrymen, flocked to Rome in the late Sixteenth century. While underscoring the “difficulty of the critical context” characterized by a “debate as to attribution with numerous proposals and uncertainties”, the scholar has linked the canvas to the late production of the Flemish artist in Rome, indicating a date that may even be posterior, due to the clear analogies with Italian models, to the supposed year of the artist’s death, which has conventionally been dated to 1577 on the basis of an interpretation of an assertion by the Vasari of the North, Karel van Mander.