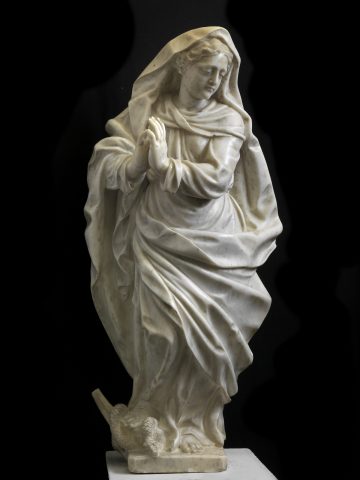 These two sculptures depict the smaller- than-life forms of the Immaculate Mary and Saint Joseph. The Madonna is captured in the act of squashing the snake’s head, while Saint Joseph is sculpted with his tunic open at the chest, with the collar almost reaching the shoulders and the cloak flung over the shoulder, fluttering in front of the right leg, as if the saint were advancing forward.

The figures, plainly baroque in both the abundant detail in the faces and in the drapery of the garments, suggest a date in the late seventeenth century. The contact with the great season of Venice, as suggested by Andrea Bacchi, allows us to attribute these two sculptures to the workshop of the Marinali brothers.

Although the difference in size does not allow a precise comparison, we can recall in comparison, for example, the splendid ‘Assumption and Angels’ by Angelo Marinali for the church of Villa Labia, now in the Ca’ Labia, as last survivor of the decoration.

An interesting comparison can also be made with the figures that adorn the Altar of the Innocent Saints in the church of Santa Giustina in Padova, by Orazio Marinali at the end of the seventeenth century, suggesting a similar date for our sculptures.