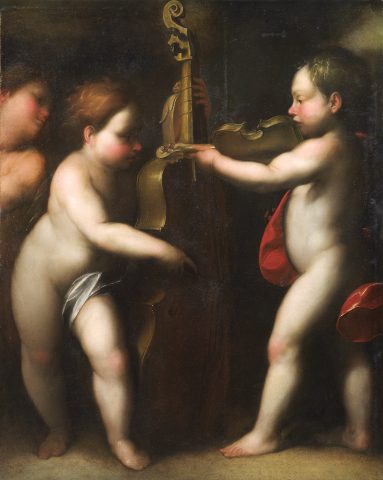 This painting, that certainly comes from the area of Lombardy and that may be dated to around the first half of the 17th century, featuring Cupids with musical instruments, has arrived with two attributions. While both confirm the area of origin and period of execution, they nevertheless diverge on the name of the artist: Fernando Arisi attributes the painting to Giulio Cesare Procaccini, a painter from the Emilia region, who settled in Milan, “due to the intense chromatic quality” but also to the “draperies, crossed by light, that feature analogies with the earlier works of Procaccini”. The expert has made comparisons with a number of works that are definitely autographed, as for instance Madonna with Child, The Saints Charles and Latin and angels at the Sant’Afra in Brescia (M. Rosci, Giulio Cesare Procaccini, Soncino, 1993, p. 87), observing, among other things, the turning child in the foreground “whose humorous face resembles the one of the cupid to the right”. Consonances may also be observed in the sharp folds of the clothes and the highlighting of the hair.