Capriccio with ruins and characters around a statue 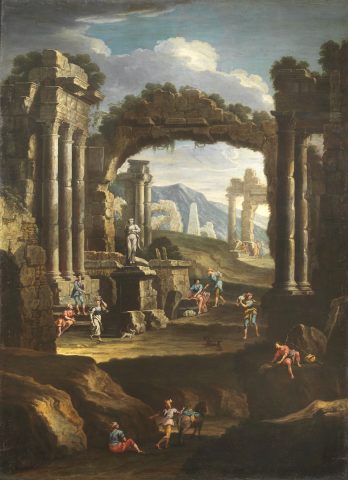 Capriccio with ruins and characters around a statue

This couple of large paintings depicts ruins populated by various characters, a painting genre that had a truly extraordinary critical and market fortune from the early 18th century onwards. The two companion pieces must be read as one, as the compositions are very similar: both are tight framed, with a ruined arch in the centre through which the eye roams over a very beautiful sunny landscape. The ruins and rocks in the foreground are full of characters dressed in the fashion of the times, intent on their daily chores.

The absolute quality of the fantasy architecture and the luminosity of the painting, that suggests a golden sunset, indicate with certainty that the artist is Clemente Spera, perhaps the most important painter of this genre in the first half of the 18th century. Born in Novara, he worked in close contact with Alessandro Magnasco and together they succeeded in creating a truly new genre, rich in capricci (whimsical figures) and quick gestural brush strokes, set in the often melancholic and useless endless sunny afternoons of Roman summers.