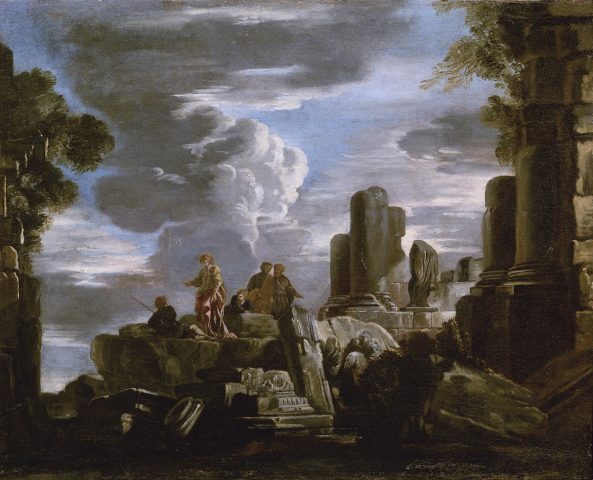 This capriccio has been defined by Ferdinando Arisi as an “original and typical work of Giovanni Ghisolfi”, an artist who was born in Milan, who after his apprenticeship moved to Rome and later to Naples, where he became pupil and collaborator of Salvator Rosa. The painter mainly specialized in landscapes with antique ruins and architectures, but he also executed a number of frescoes in noble mansions. He is considered an important precedent for the painting of the Eighteenth-century artist Panini, who inherited the taste of the Milanese; in fact, his contemporary Orlandi defined him as “a witty youth who delights in painting with appealing colors, in the manner of Ghisolfi”. As  opposed to Panini’s  “appealing colors”, the author of this painting features “a quite poor palette, with a predominance of violet shades and somewhat cold colors alongside the gray stones” (F. Arisi, Gian Paolo Panini […], Rome, 1986, p. 38).

As observed by the expert, the caprice we are presenting has points in common with the painting Ruins of Carthage at the Gemaeldegalerie of Dresden (A. Busiri Vici, Giovanni Ghisolfi […], Rome, 1992, p. 91, n. 48); referring to the latter, Arisi observes “the same compositive rhythm and an analogous use of the light, as well as the same way to treat the vegetation”, but he also observes analogies with the two paintings by the artist found at the Liechtenstein Museum, in particular with the one titled Roman ruins (inv. GE219), which features a similar layout along a diagonal beyond which a sky enlivened by dense clouds stands out; blades of light cross the ruin, entering them and grazing their surfaces.