Allegory of Peace and Justice 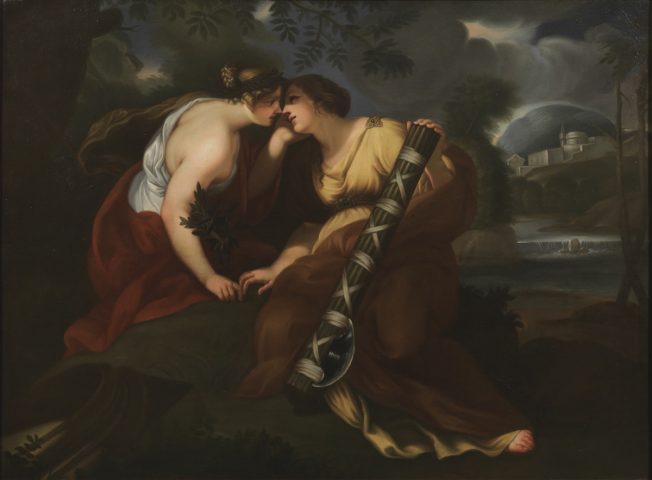 Allegory of Peace and Justice

The motif of this painting illustrates the last verse of a passage of the Biblical text of the Psalms (85:11): “misericordia et veritas obviaverunt sibi, iustitia et pax osculatae sunt”, where it is announced that “mercy and truth will embrace, justice and peace will kiss. Truth will spring from the earth; justice will look down from heaven” (Ps. 85: 9-12)

The invention of this painting, whose success is witnessed by the many reproductions, is the merit of the Roman painter Ciro Ferri, famous pupil of Pietro da Cortona. Active in numerous famous decoration commissions in his native country, Ferri also worked in Florence where he around the year 1660 completed the Stanze dei Pianeti in Palazzo Pitti. The work had been begun by Cortona, to whom it had been entrusted by Ferdinand II in 1641, but the master had left it unfinished in October 1647.

As observed by Maurizio Fagiolo dell’Arco, this invention by Ferri has points in common with the squinch featuring Calliope and Melpomene, executed by the two artists in the Hall of Apollo in Palazzo Pitti. The scholar has suggested that Ciro Ferri may have executed the work “for some important customer in the period under the Chigi pope”, dating the composition to around 1662. Dell’Arco also points out that one of the twenty-six medals coined under Alexander VII Chigi (1599-1667) features precisely this rare motif, and that a version of this work by Ciro Ferro is documented in Denmark already in 1669.

As mentioned, several works with this motif are known: two are mentioned by the self-same Dell’Arco, one in his own collection (now at Palazzo Chigi, Ariccia) and another in a private collection (op. cit., numbers 68-69); other versions have appeared at auctions, as Christie’s (11 March 1983, no. 10) and another at Pandolfini (10 October 2007, no. 376, p. 163); the latter is smaller in size, not unlike the one that is already part of the Fagiolo Dell’Arco collection.