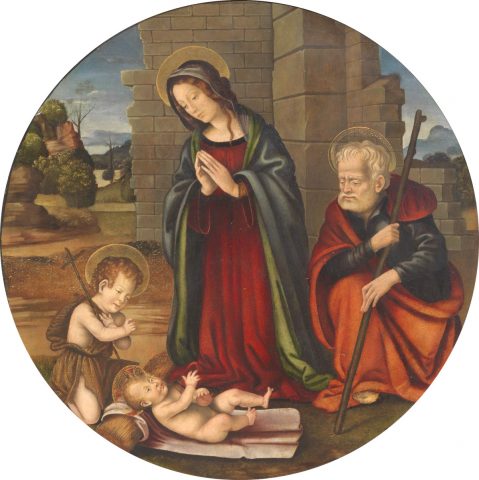 The reassuring harmony of this painting, in which the Virgin, Saint Joseph and the Infant St. John are shown in prayer before the Saviour, reflects the fact that the equilibrium of Renaissance is nearing maturity. The carefully balanced composition is enclosed in the characteristic circular format which was so popular in Florence in that marvellous period straddling the Fifteenth and the Sixteenth century, in which the city enjoyed an extraordinary artistic fervour. In addition to the slow and meditated movement of the figures, characteristic traits of the period comprise the architectures in ruins in the background, the stones rendered painstakingly in perspective and the glimpses of the landscapes on the sides, the left one with cliffs and a rendition of vegetation in which we recognize the recent achievements of Leonardo.

The stylistic elements in this work are clearly attributable to the milieu of a leading figure of the artistic scenario of those years, Filippino Lippi, and this work on wood is in fact still attributed to the great master’s school in the photo archive of Federico Zeri (Zeri Foundation, card no. 14698), which received an image of the painting in 1961, when it was located in New York, in the Wildenstein & Co collection.

It is to Andrea De Marchi that we owe the attribution of this work to Niccolò Cartoni, an artist who was close to the master, but who vaunts clearly recognizable traits which also bear witness to other influences, among which we may mention, in addition to Filippino Lippi, artists as Domenico Ghirlandaio and Lorenzo di Credi; we also find some points of contact with the work of Raffaellino del Garbo.

The body of work of this artist comprises paintings which have, at one time, been attributed to anonymous pupils of Lippi, as the Master of Memphis or the Master of Naumburg, the name with which a work is still recorded, on the suggestion of Everett Fahy (1996), namely the Madonna with Child and Infant St. John of the Palatina Gallery of Florence (inv. 1912, no. 349; see I dipinti della Galleria Palatina e degli Appartamenti Reali. Le scuole dell’Italia Centrale 1450-1530, edited by S. Padovani, Firenze, 2014, no. 82, pages 410-412). Also this painting is to be attributed to Cartoni.